I have managed to dodge the Chicken Bullet for 27 years now.

The Missus loves chickens. Happy childhood memories and all that.

But she is increasingly determined to have chickens. And she is a force to be reckoned with.

Which took us to the Kumeu Showgrounds at the weekend.

I knew we were 10,000 miles from home, but the smell of chicken poop and the constant roostery cock-a-doodle-doos sure made me feel like we were back in Oklahoma.

Unlike the Missus, I did not have chickens when growing up. The only feathered creature I ever owned was a nightmare names Peewee.

It was common back then to give kids a tiny chick for Easter. Sometimes they had even been dyed like an Easter egg. So cute!

At least they were until the neighbor’s cat got them.

Anyways, come to find out, Peewee was not a chicken.

He was a demon goose who quickly grew taller than four-year-old me. He was also meaner than me and predisposed to thwacking me on the head if I dared go into his sovereign empire, which had previously been my backyard.

Let’s just say that I hated Peewee, and it left me with a bad feeling for all things with feathers.

Yet here we are in New Zealand, in 2013, and feathers are destined for my future.

I had to laugh when I strolled down Chicken Lane in Kumeu, and saw the red tags that proudly proclaimed “First Prize”.

The big black bastard below was the winning Leghorn.

Not this kind of humorous Leghorn… THIS kind of huge Leghorn who, and I am hardly exaggerating, was as big as a doberman and told me with his eyes that there was nothing in the world he wanted more than to hold me down with his savage claws and peck me to death.

In the name of Peewee. 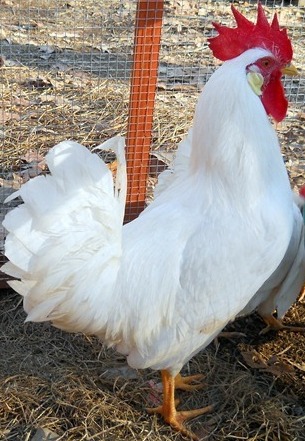 It should be noted that my fear of feathers was caused by more than a gander goose named Peewee.

It was caused by the epitome of feathered evil. And his name was Booger Red.

If you rounded up all the demons from hell and covered them with feathers, THAT would be Booger Red — the baddest, meanest rooster in the entire state of Oklahoma.

When we visited Oklahoma, I would truly marvel every morning when my scrawny little mother would pick up her stick and the Folgers can, and go into the chicken coop to collect eggs.

Every morning, without fail, Booger Red would go completely insane. With blood in his eyes, he would come at Mom, flailing his evil talons of death, trying with all his might to rip her in half.

And every morning, my little mother would knock that friggen evil rooster to the ground, BOOM, collect the hens’ eggs, and go cook us breakfast.

On more than one occasion, I picked up the 12-gauge to go deal with Booger Red, but Mom would always say he was necessary to keep away the possums or lions or tigers or whatever roamed the Oklahoma hills in search of chicken eggs.

If you think I am exaggerating about this monster of rooster, I offer Exhibit A. My grown-up niece STILL has nightmares about Booger Red.

“I remember getting cornered by him. Gammy threw a coffee can at his head and knocked him out for a long time. I thought she’d killed him. Nope. That mean S.O.B. just got up, shook his head a little and went back to his normal terrorist self.”

And yet, despite the traumas of my past, it seems that I am doomed to have chickens. In my own back yard.

At the weekend, the Missus even talked to a lady at the world-famous Kumeu Showgrounds who happens to own the New Zealand Champion cock… which we are not making up… and who has promised to sell us chicks come spring AND make them a triangular chicken coop that will leave the Taj Mahal for dead.

Alas, I have accepted my feathery fate, and acknowledged that the Missus has been patient and earned the right to get all clucky.

But if she thinks, for even one second, that I am going into her chicken coop to collect eggs and deal with a form of rooster evil that not even Peter Jackson could create, she is out of her cotton-picken, chicken-pluckin’ mind.

Back to top
mobile desktop